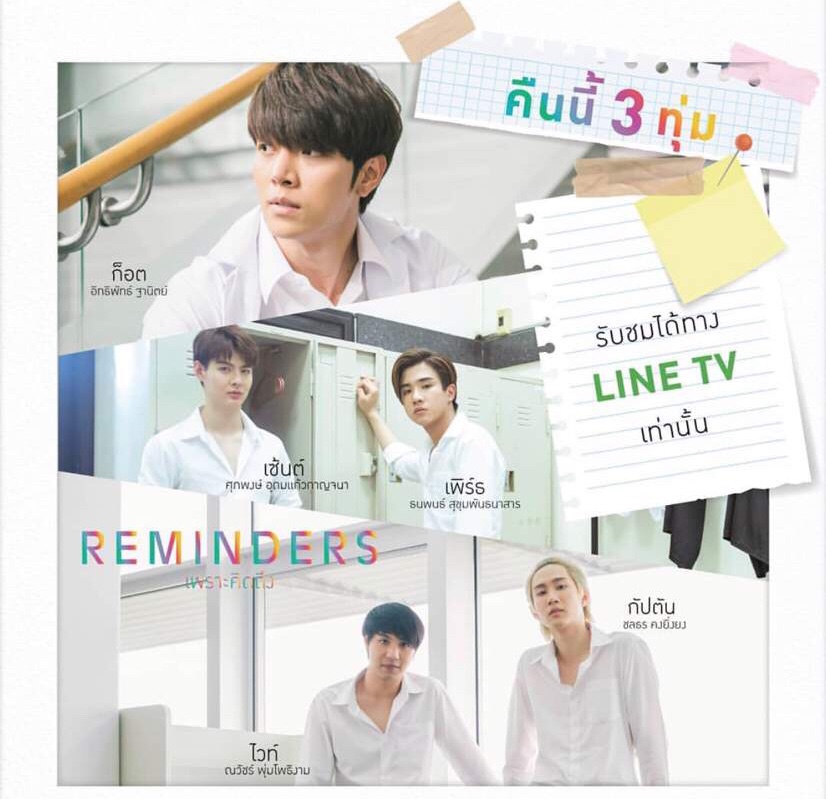 Reminders is a mini series that was released by Line TV around two months ago, back in April. I think like most people, I saw all the familiar actors and thought that this was going to be a continuation of some sort but it really wasn’t…at least I don’t think so? It gets a little confusing because all the actors (the three couples) are from two different series but they are also playing the same couples in this series, only they all have different names, except for the OG couple – Phun And Noh.

Their names are: (left: previous names / right: current names in this series)

So I thought that maybe this wasn’t a continuation but just a brand new series? But then that doesn’t explain why Phun and Noh have the same names as their previous characters.

They each have some similarities of their previous characters too, such as Tin/Two being rich and him and Can/Wish liking each other but not yet being together; and also how Ae/Pin and Pete/Son are already a couple and Ae/Pin is super passionate and emotional (like, seriously omg he’s so emotional).

But the main and BIGGEST difference with these characters, besides the name changes, is their change in personality and overall dynamic in their relationship. I won’t go into too much detail but if you have seen Love By Chance then you already know what I mean. It’s quite startling actually. But yet, Phun and Noh have the same names, same personalities, and same relationship dynamic. It’s weird and I’m confused.

And also! Why the heck is Godt Ittaphat on the darn poster promo?? He was literally in the series for all of ten minutes (as a doctor, not even a main character). He gets front cover poster promo while the third couple does not?? Okay, I got it, he’s handsome, but seriously? Give Wish and Two their due diligence and put them on the poster promo!

Anyway, the mini series follows these three couples as they navigate insecurities in their relationship while in college. The main messages of this little series was to always communicate with your partner and to trust your partner. If you don’t have trust and you’d rather assume things instead of discuss things, then your relationship is absolutely going to fall apart.

Overall the series was just okay. I was expecting something better since it was directed by the same guy that directed LBC but alas, I was left a little disappointed. There really wasn’t much of a story line. The story line was basically two characters running around thinking that their boyfriends might be interested in someone else. But they were so pressed about it and being so absolutely ridiculous that it turned straight up comical. I laughed so hard and so much at some of the ridiculous shenanigans certain characters would get up to because they were so worried about what their partner was doing. But the entire time, all they had to do was just ask! So kudos to the writers for really making this a romcom lol.

There was a happy ending for all couples involved which I was glad to see. The acting was still just okay. Perthe, the actor that plays Ae/Pin, is by far the better actor out of everyone which is kinda funny because he’s the youngest out of all the actors with the least amount of experience. Homeboy wears his emotions on his face so well and he can cry at the drop of a dime. And it’s believable! 🙌🏾

Overall, I think this mini series was good for passing the time but nothing to get hung up on. It was just really nice to see all the couples together again. I will admit that it’s hard not to compare this little series to the other shows that the actors played in though. It’s hard to separate the different shows for the simple fact that they are the same people paired with the same love interests from their other series.

There are rumors that this was kind of like an introduction to the new season of Love Sick that’s supposed to be coming out (after FOUR YEARS!) and an official end to Love By Chance since they won’t be getting another season. But those are just rumors.

I loved Love By Chance but I never finished Love Sick. I stopped Halfway through the second season because it was just being dragged out for far too long and focusing on all the girl drama that I just couldn’t bring myself to care about. Everyone was so unlikable! Ugh! And how do you jump from 12 episodes in the first season to freakin 36 in the second season?? Yea…I quit that. So I actually have no idea how Love Sick even ended. But like I said before, I shouldn’t compare the different series because they aren’t related.

I’m just babbling now so to wrap this all up, give this series a try if you haven’t already. It’s a good time waster and you’ll definitely get some good laughs in at the silly shenanigans. I do think one can appreciate this mini series more by already being familiar with the actors and their previous characters and relationship dynamics.

Overall I give this mini series a solid 3 out of 5 stars. It was just okay.