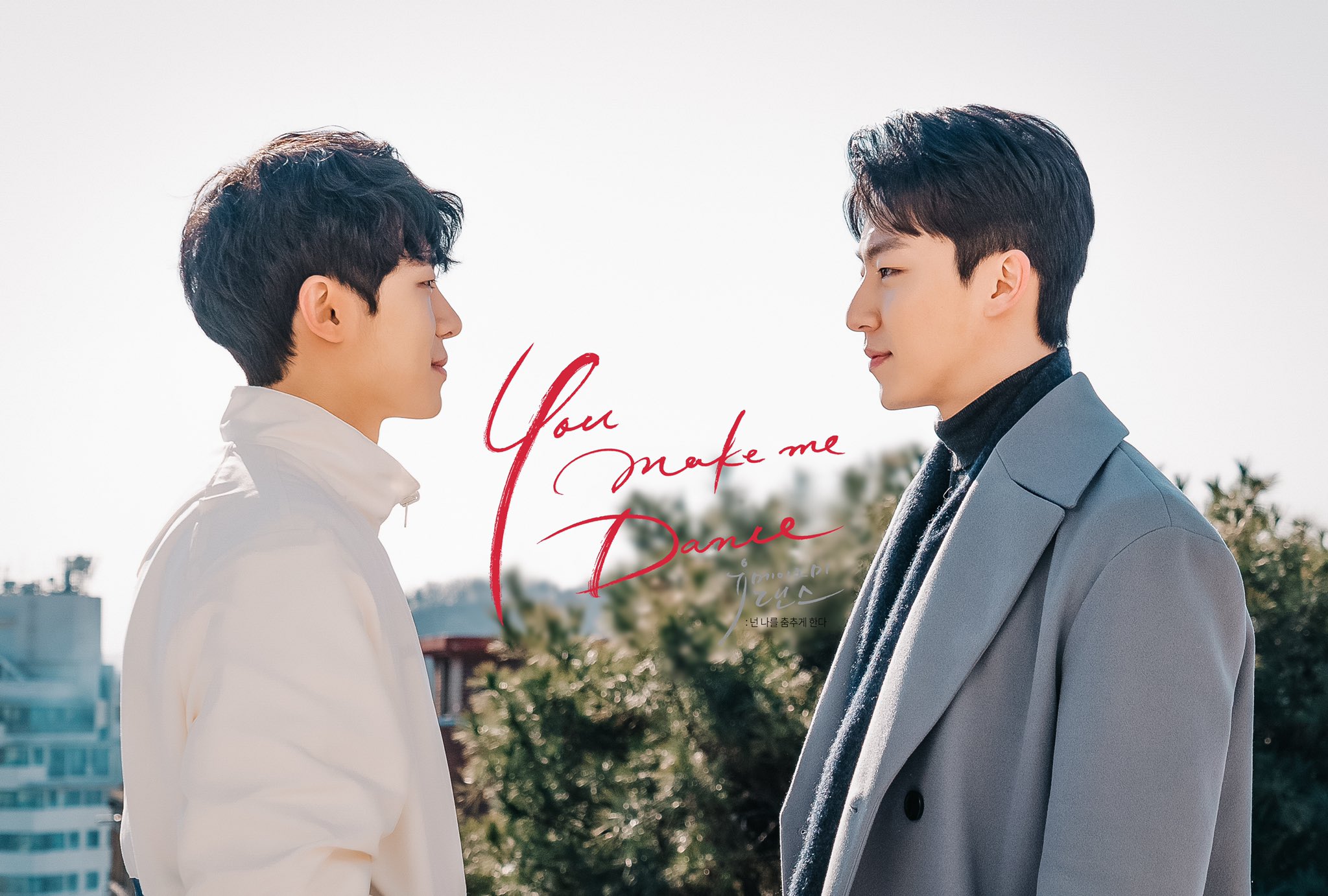 Hello! Wow, it has been a long time. I’m pretty sure it’s been about 6 months. I needed the break honestly. Life was happening to me, and I stopped watching dramas completely. I haven’t even seen the ones I was greatly anticipating and raving about. Hopefully I still have some readers left on this blog.

I’m not sure if anyone noticed, but I also lost a lot of materials and posts due to a site upgrade. The loss was completely unexpected, and I’ve spent the last 6 months trying to repost many images (which I am still working on, so if you come across a post with empty elements, this is why). This loss added to my complete lack of motivation of ever posting again on this site. But alas, here I am.

Anyway, recently I was able to finally sit down and watch a few mini-series online with the first one being a mini drama called You Make Me Dance. So, please be on the lookout for my upcoming reviews :]

Firstly, if you are watching this drama on VIKI, don’t read the synopsis. It’s a bit inaccurate and makes you think certain things are going to happen when they don’t. At least not to the extent you’d expect based off the written summary.

So, in my own words, You Make Me Dance is a story about a young guy named Shi On who is alone in life and struggling greatly with his finances. His mother got married and moved to Europe a while back and seems to have completely cut him off after her nuptials; despite promising to always be there for him even though she married a new man. Shi On is in university and is majoring in contemporary dance. He’s struggling with his school fees as well as paying the rent for his apartment and so takes on small, odd jobs to make some money even though it interferes with his dancing.

Hong Seok is a guy in his late 20’s and is basically a loan shark. He works for a lending firm and makes his living collecting the debts of others. He is unhappy with this career choice but has chosen to stick with it as doing so guarantees his financial stability. Hong Seok is also very good at his job and his money hungry CEO knows this and wants him to stick around for as long as possible.

Shi On and Hong Seok cross paths when Hong Seok is sent to collect Shi On’s debt or else he will be kicked out of his home. Shenanigans ensue while Shi On begs for more time and the end result is Hong Seok living with Shi On as a way to “keep an eye on him” and to make sure he pays up. Living together allows them to bond and grow closer, and their growing warmth for each other soon turns romantic which jeopardizes Hong Seok’s job.

Shi On is a happy guy that always tries to see the positives and the light at the end of the tunnel. He does his best to always see the good in people even when they treat him badly. He doesn’t hurt others and more than anything he just wants to dance and speak to his mother again.

Despite all these positive traits, Shi On doesn’t have any friends. He’s actually a bit of a pariah amongst his dancing peers. I think a lot of this is due to the negative influence of one of his seniors who is jealous of him and tries to jeopardize Shi On every chance he gets so that he can remain the best dancer in the school’s program. The rest of the dancers follow along blindly and even showcase some of their own jealousy towards him.

I liked Shi On as a character. He was a bit naïve and would often have childlike enthusiasm for things but not so much to annoy me or to make me think he’s stupid. No matter what was thrown at him, he never lost sight of his goals and dreams. Dancing was the thing that brought him true happiness even when it was also causing him stress. I liked his positive outlook on life despite his hardships and I honestly wish I could have the same mindset. He was a young guy that wasn’t afraid to smile, and I wanted him to succeed.

Hong Seok is a quiet guy with a stony outward appearance. Despite his appearance he is actually very kind-hearted and always tries to complete his debt collecting missions as pain free as possible. He never uses violence, and he never yells or belittles the debtor. He just wants to get the payments and leave as quickly as possible since he doesn’t really like his job anyway. A pain free collection for the debtor is a pain free collection for him as well. And the sooner he can complete this last collection, the sooner he can resign and find a new career, which was his original plan at the start of the series.

I liked Hong Seok too. I thought he was going to be one of those mean loan sharks that makes the debtor’s life miserable by using violence and manipulation (*cough* cough* I’m looking at you Mr. Heart). But he wasn’t that way at all, and I was happy for that. Even though both Shi On and Hong Seok were kind people, they had contrasting personalities that matched well together. Shi On was the dreamer that didn’t always make the best decisions despite his good intentions. Hong Seok was super practical and was a hard worker who took his job seriously even though he didn’t like it. He seemed like a person that would give his all no matter what because a job well done is more important than his feelings for what he does.

I think all the actors in this series did a good job, even the minor characters. My favorite character was probably Hong Seok. I liked the confidence that he exuded even when he wasn’t sure if he was making the right decisions. I loved how caring he was towards Shi On and how quickly his feelings changed for him. After the first night of moving in and learning a bit more about Shi On, it was obvious that Hong Seok just wanted to take care of him so that Shi On can have a more peaceful life and not be alone anymore. We also see that Hong Seok liked being in Shi On’s company because he is also alone. But his conflicting feelings came about due to his job and the rules he was supposed to follow.

This is something I can understand as becoming romantically involved with someone you are supposed to have a strict professional relationship with can make many things very difficult. It all becomes a conflict of interest.

I think the actors playing Shi On and Hong Seok had a good chemistry that allowed me as a viewer to want the best for their characters throughout the series. Nothing seemed awkward or off balance and it was easy for me to believe that they were comfortable with each other. Overall, the way the actors embodied their characters was enough to propel the story along and I was satisfied by the end of the series.

I liked the story of You Make Me Dance. I found that I could relate to Shi On with many of his struggles as well as Hong Seok and his decision to stay in a job simply for financial security. Isn’t that what we all need? Especially nowadays. Each character had relatable elements that drew me into their story, and I only wanted the best for them.

The one thing that I didn’t like about this series was that there was NO DANCING! How on earth can you have a show called You Make Me Dance, have a main character major in dance, and yet…there is no real dancing??

The dancing in this series was passed off as some slides across the floor, a few arm swings, and some posing in dancer-like positions. I was soooooo disappointed! After a while I began to think that maybe the dancing was being saved until the end when Shi On finally gets to his audition.

But the dancing never came! Instead, as the music plays, we as the viewer are shown a sequence of shots of Shi On and Hong Seok and how their relationship developed over the course of the show, which are all flashbacks to scenes we have already watched. Boooooooo. That moment would have been so much better had it actually been a dancing scene since, you know, Shi On is supposed to be a dancer and his dance was inspired by his feelings for Hong Seok! Ugh. All this talk about dancing and Shi On’s final audition across the whoooolllee series, and yet we never see an actual dance. Wow. The writers and director really dropped the ball with that.

The scenery wasn’t anything special in my opinion. It was winter time so the majority of the show took place indoors at different empty locations. For whatever reason, I was acutely aware of just how empty all the locations were. Like, the feeling of not having extras on set was very strong for me for some reason so a lot of the scenes felt a bit empty in terms of the presence of people. This is a mini-series that I feel would have benefitted from having more extras in the background.

I also noticed just how cold it was absolutely everywhere! I understand that this was filmed in winter and there was snow on the ground, but even the inside locations were freezing cold and I could see the large puffs of smoke of the actors’ breath while they were inside. It really made me feel bad for the actors that they could never feel warmth while shooting this series.

I don’t remember much of the music, honestly, besides the theme song. But what I do remember was really nice. I have only seen 6 K-dramas in my entire life and all of them have been mini-dramas. It seems that K-dramas have really nice music in them with the OSTs being the most memorable.

Overall, I recommend this series. It’s short, so you can watch it in one sitting if you want to, and it’s also quite sweet with no heavy drama. So, if emotional turmoil is not your thing, give this series a chance.

I’m not quite sure what to rate this series. Although there are things that I think can be improved (such as the lack of dancing), there isn’t anything I would change that pertains to the story or acting itself. I give this series a 3.5 out of 5 stars. I enjoyed it while I was watching it and I can see myself watching it again, just not any time soon. I liked it. It just wasn’t a favorite. 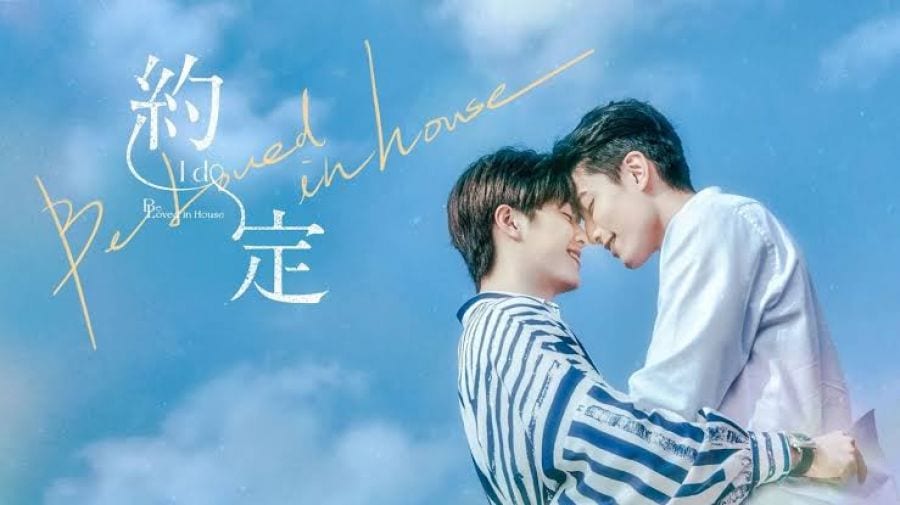 [Review] Be Loved In House: I Do